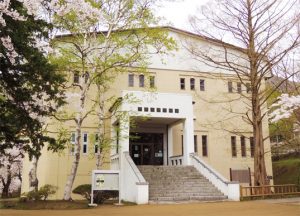 Take the tram of No. 2 route for Yachigashira and get off at Aoyagi-cho. It takes 7 minutes to walk to the museum through Hakodate Park. 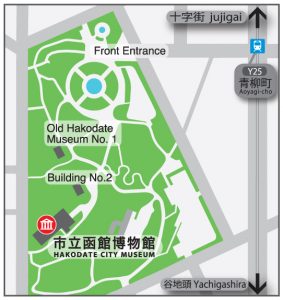 Permanent exhibits in this museum change every year and works garnered based on a specific theme are displayed.
Contents of Exhibitions:
・Prehistoric artifacts such as pottery, stonetools and clay figures excavated from the sites inside and outside Hakodate
・Artworks such as hanging scrolls drawn by Hakyo Kakizaki and oil paintings by artists of Hakodate
・Preserved specimens such as birds and insects found in Hakodate
・Relics from Hakodate War and disastrous fires in Hakodate
・Daily objects such as post-war tools used in everyday life
Other displays related to the history of the museum:
・Ethnic materials and fish specimens collected by the Hokkaido Development Agency
・Display cases used in Meiji Era

It was opened on May 25, 1879. It is the oldest museum existing in Japan. The museum is a one-story, Western style, tiled-roofed, wooden building which covers approximately 108 square meters . The outside walls are painted white and the windows can be opened up like sliding doors. At the entrance, you’ll see the North Star (the Pole Star), which is a symbol of Hokkaido Development Agency. When the museum was opened, there was a Western style wooden handrail and a five-storied round show case in the middle of the building. 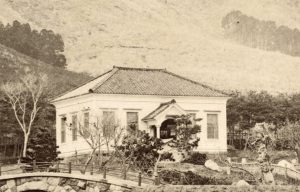 It was opened on August 11, 1884.  The building with about 117 square meters was a one-story, Western style wooden building with a zinc-lined roof (originally, with a straight-grained cedar wood roof). The outside walls were painted white, whereas the arc and the pillars at the front entrance were blue, the window frames were yellow, and the crest boards were white, very rich in color. At the entrance, there was a Corinthianesque decorated pillar and a semicircular fanlight. The upper part of the window was semicircular and the lower part was opened up and down with a balance weight. 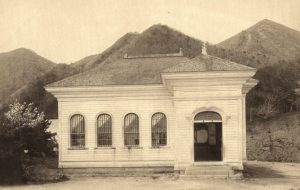 It was opened on July 1, 1891. This gallery which covered an area of approximately 317 square meters is a one-story, Western style wooden building. It has a lot of windows to gather in natural light and ventilation . In this gallery, which was managed by the Hokkaido government, collections related to fisheries were displayed.  In 1895, it was sold to Hakodate City and merged with the other two buildings in order to be reorganized as Suisan Chinretsu-jo  Building No1, No.2 and No.3. Afterwards, Building No.3 was closed and demolished  in 1901. 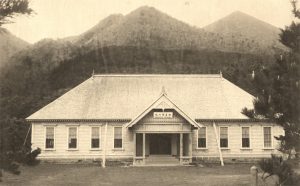